What is the GRUB2 boot loader?

There are various things that make up an operating system. In any operating system, one of the most critical parts is powering on the machine. During this process, the computer will execute a small program in read-only memory (ROM) to begin initiating the startup process. This small program is known by many names, but most often called a boot loader. In almost every Linux distribution, including Fedora, GRUB2 (or GRand Unified Bootloader 2) is the default boot loader. Even though it is a critical piece of the operating system, many people aren’t aware of the boot loader, all that goes into it, or how it can be customized.

There are many different types of firmware that initialize system hardware during the startup process. Some of these include options such as Open-Efi and legacy / UEFI BIOS. GRUB2 supports these. This broad range of compatibility with various firmware ensures that GRUB2 can be used on almost any system. It works on some of the oldest machines still running as well as some of the newest hardware on the market.

The design of GRUB2 is security-oriented and flexible for a variety of needs. It has two well-known security and privacy features to help protect your system. Normally when starting your option, you are able to enter your BIOS or UEFI settings and change them without logging in. GRUB2 allows you to set a password that must be entered to change these settings. This helps keep your system safe and secure from someone who may have physical access to your machine. An example of this being used is blocking USB devices from booting up on the system.

Additionally, GRUB2 supports Linux Unified Key Setup, or LUKS. When installing an operating system for the first time or formatting a hard drive, there is an extra security option to encrypt the entire file system. LUKS is the tool used to add an encryption layer from the root directory across all parts of the machine. Before you are able to reach the login screen of Fedora or another Linux distribution, you must enter an encryption passphrase to unlock your system. GRUB2 integrates with LUKS and supports booting with an encrypted file system.

In the world of security, not every threat may come from the Internet or a remote hacker. Sometimes the biggest security breach is at the physical layer with who has access to a system. Together, these two security features allow you to keep your system locked down and secure in the event you lose access to your machine.

Example of a customized GRUB2 menu using a custom wallpaper

GRUB2 has powerful settings for security and initializing the operating system, but it also has more features to customize the user experience. It supports background wallpapers, different fonts, and more to personalize your system. The Grub Customizer tool allows you to make these customizations quickly and easily.

To install the tool, open up a command line and enter the following command. You are prompted to install the package.

This tab will present you with a variety of options to theme and customize your system. You can select a background image, change the font family, and alter the font colors. The center part of the screen will update with a live preview of what it will look like while you make changes. When you’re done making changes, hit the Save button in the upper-left corner and reboot to see your changes take effect.

Note that if you use a custom font, you MUST use a font size that will fit in your system’s resolution. If the font size is too large for the resolution of your system, GRUB2 will enter a crash loop and you will have to boot from live media (e.g. a USB or CD) to fix this. 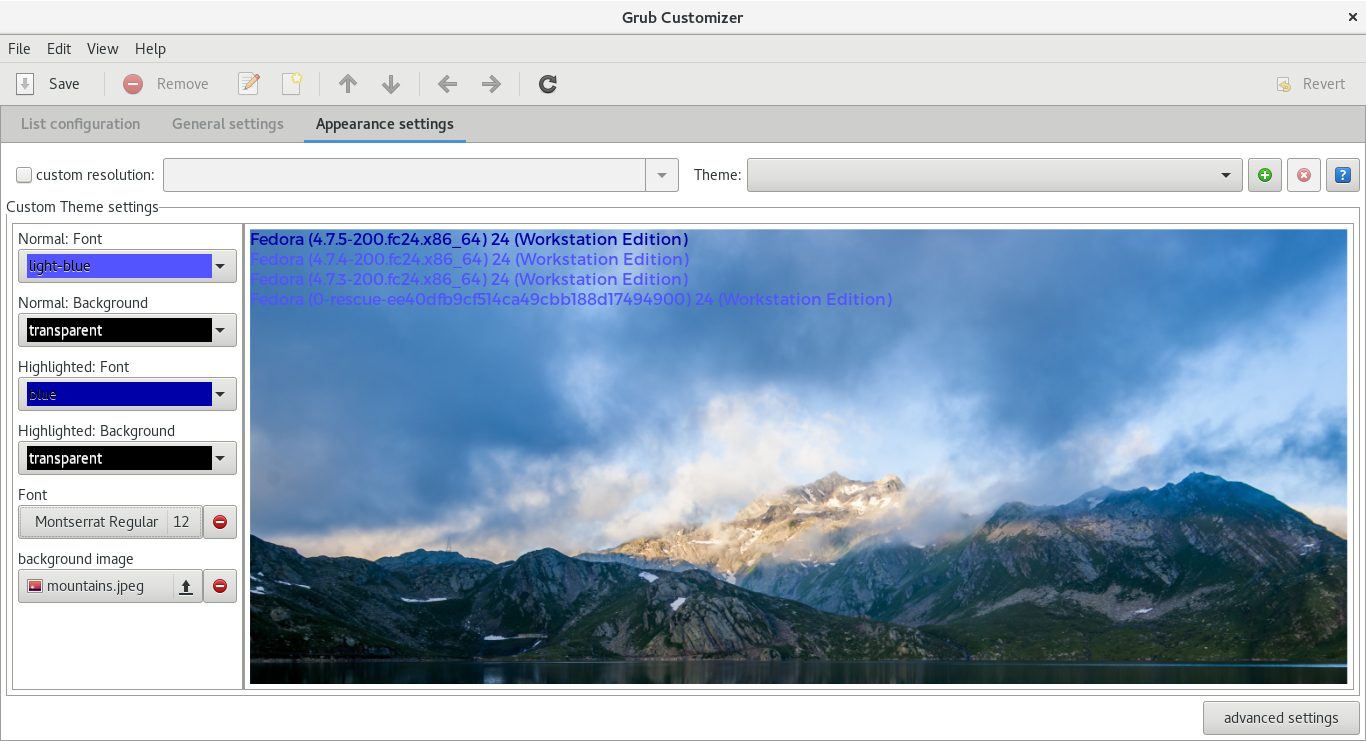