Posted by Sumantro Mukherjee on September 21, 2016

Rust is a system programming language which runs blazingly fast, and prevents almost all crashes, segfaults, and data races. You might wonder exactly why yet another programming language is useful, since there are already so many of them. This article aims to explain why. 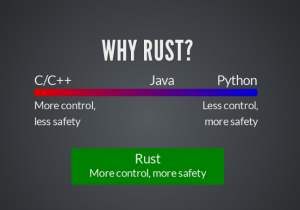 You may have seen a diagram of the above spectrum. On one side there’s C/C++, which has more control of the hardware it’s running on. Therefore it lets the developer optimize performance by executing finer control over the generated machine code. However, this isn’t very safe; it’s easier to cause a segfault, or security bugs like Heartbleed.

On the other hand, there are languages like Python, Ruby, and JavaScript where the developer has little control but creates safer code. The code can’t generate a segfault, although it can generate exceptions which are fairly safe and contained.

Somewhere in the middle, there’s Java and a few other languages which are a mixture of these characteristics. They offer some control of the hardware they run on but try to minimize vulnerabilities.

Rust is a bit different, and doesn’t fall in this spectrum. Instead it gives the developer both safety and control.

Rust is a system programming language like C/C++, except that it gives the developer fine grained control over memory allocations. A garbage collector is not required. It has a minimal runtime, and runs very close to the bare metal. The developer has greater guarantees about the performance of the code. Furthermore, anyone who knows C/C++ can understand and write code for this language.

Rust runs blazingly fast, since it’s a compiled language. It uses LLVM as the compiler backend and can tap into a large suite of optimizations. In many areas it can perform better than C/C++. Like JavaScript, Ruby, and Python, it’s safe by default, meaning it doesn’t cause segfaults, dangling pointers, or null pointers.

Another important feature is the elimination of data races. Nowadays, most computers have multiple cores and many threads running in parallel. However it’s tough for developers to write good parallel code, so this feature removes that necessity. There are two key concepts Rust uses to eliminate data races:

To get started, just install the package:

Here’s a demo program you can create. Edit a file with this content called helloworld.rs on your system:

Then use rustc to compile the program and run the resulting executable:

Run the following command to install the latest testing version on Fedora:

Drop us a mail at test@lists.fedoraproject.org or #fedora-qa on IRC Freenode to get started!

Featured image based off this image from Unsplash