Open source projects are built online and a lot of their community members are placed all over the world. Even though projects have people from around the world, this doesn’t stop ambitious community members to organize open source conferences or events in their own cities. Whether they’re focused generally to open source or for a specific project, you can find a variety of conferences, hackathons, workshops, or meet-ups all over the world. Fedora benefits from having Ambassadors to attend these events to introduce Fedora and spread the word about the community. It’s not uncommon to see Fedora participating in these events, and Linux Weekend 2017 in Tirana, Albania was not an exception.

From March 25-26, 2017 in Tirana, Albania, nearly 130 people attended the first-ever Linux Weekend 2017. Linux Weekend was organized by Open Labs Hackerspace at the Universiteti Politeknik i Tiranës as an introduction to Linux for beginners. Throughout Tirana, universities have a strong focus on Windows or macOS operating systems and little focus is given to Linux. Open Labs community members wanted to organize an event that would promote Linux as an open source alternative and demonstrate some of its benefits over proprietary environments. The event collected representatives from various communities, including Fedora, Ubuntu, OpenSUSE, NextCloud, MusicBrainz, and more.

The Open Labs community is not unfamiliar to organizing open source events in Tirana. Their portfolio includes Fedora release parties, OpenStreetMap map-a-thons, Wikipedia edit-a-thons, and Fedora community meet-ups. However, these events have been targeted towards people who already had prior interest or knowledge about open source communities. The organization and planning for Linux Weekend began in the middle of January as an idea to introduce Linux to complete beginners. The Fedora community table had no shortage of swag, stickers, and more to share with attendees

Planning and organizing Linux Weekend was a community effort. Jona Azizaj is a board member of Open Labs and a Fedora contributor, and was involved as an organizer for the event. “This was the first edition of Linux Weekend, so the main focus is to raise awareness about Linux and open source. We wanted to educate beginners and spread the word about the choices that are available,” Azizaj explained. The two tracks for the event were full of talks and workshops to introduce attendees not only to Linux, but also various software and applications of what someone can do with Linux.

Many of the attendees were students who had either heard of Linux in their classes or from their peers. Other attendees included industry professionals or other open source community members. Several representatives of Fedora from different parts of the community were in attendance as well. Ambassadors, designers, and translators were available to answer questions and teach newcomers about Fedora.

Since the focus of the event was to teach newcomers about Linux and how it can be used, Linux Weekend was organized to be an introduction to various parts of the Linux ecosystem. Representatives from Fedora, Ubuntu, Arch Linux, OpenSUSE, Linux Mint, and elementaryOS gave introductions to the operating systems and their communities. In addition to distributions, there were also sessions on open source licenses, NextCloud, text editors, MusicBrainz, and more. The benefit of these sessions were demonstrating the different ways Linux can be used to accomplish various tasks.

Sidorela Uku introduces different editors and tools in her talk

In addition to the various sessions during the weekend, there were three community booths for Fedora, OpenSUSE, and Mozilla. Attendees had a chance to get swag from each project and also talk with representatives about their own experiences or how to get started using their project.

Sidorela Uku was both an attendee and a speaker at Linux Weekend. Her talk, “Programming in Linux, editors, and tools”, introduced various text editors and other tools to help customize any Linux distribution to someone’s needs or personal preferences. In addition to sharing her own knowledge, she was also excited to discover new things. “I wanted to attend the talks and workshops to learn as much as possible. I also wanted to figure out the next steps to find a project and get involved as a contributor,” Uku explained. “I also wanted to share the things I know with others to help them get started with Linux.” This was Uku’s first time speaking at an event and she looks forward to more open source events in Tirana in the future.

Various members of the Fedora community were also in attendance. Some of the Fedora presentations over the weekend introduced the project to newcomers, detailed the translation efforts to bring Fedora to Albanian, and also guided attendees on how to make their first steps as contributors. The Fedora presence aimed to help give newcomers a taste of the operating system but also to show the impact someone can have if they decide to contribute. 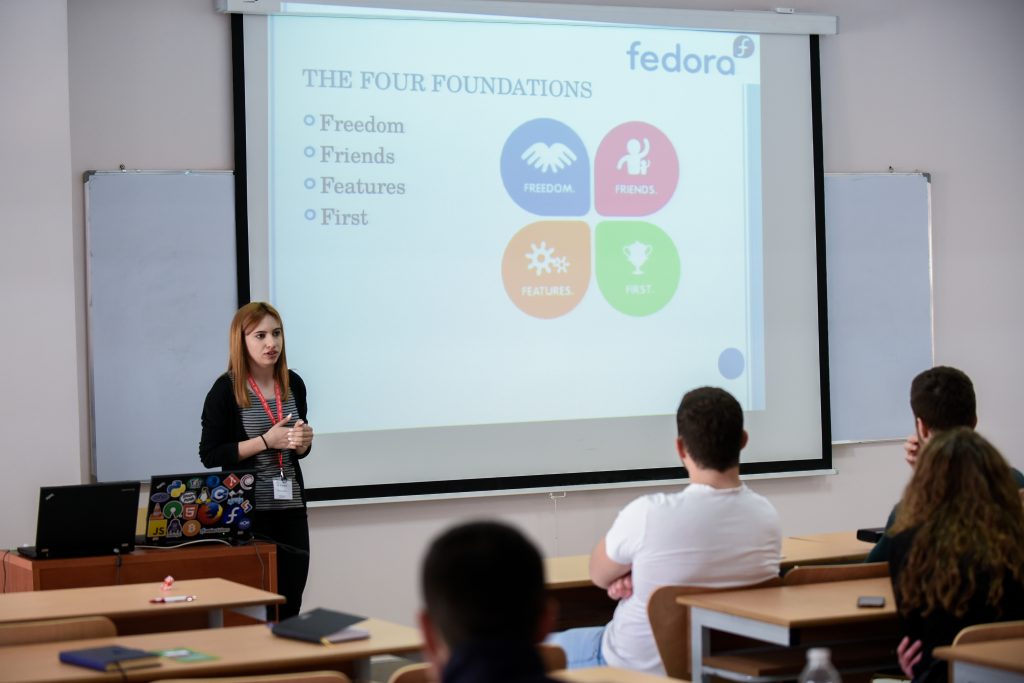 Mariana Balla was one of the first speakers on Saturday morning with her talk titled, “Introduction to Fedora Project and how to be a part of the community”. She started with localizing Fedora into Albanian in early 2016 and more recently started to become an advocate as well. “Fedora is one of the most used distributions, and it was great to have Fedora here to spread the word and show what our community is all about,” Balla said. “One thing I hoped to show in my talk was that technical skills aren’t required to contribute to Fedora. There’s so many things that aren’t code that people can help with!” One of the highlights of Balla’s presentation was breaking down the different sub-projects in the community and how they contribute to making Fedora what it is. One site that was mentioned was whatcanidoforfedora.org, a site anyone can click their way through to find an area that interests them.

One key contribution area that was important for the local community was localization. Many attendees and speakers alike thought it was important to have software translated into their native language. Anxhela Hyseni is a Fedora Ambassador and led the workshop on “Translation of Fedora”. “It’s important for Albanians to have software in Albanian because we are Albanians!” Hyseni laughs. “People are better able to understand Fedora and it makes it more accessible for us to have it in our local language.” She hopes that attendees left Linux Weekend with plenty of new contacts in the open source community and a better idea of what Linux is all about. She and others also helped Linux newcomers install Fedora 25 as a dual-boot or for virtual machines in the installfest on Saturday morning. 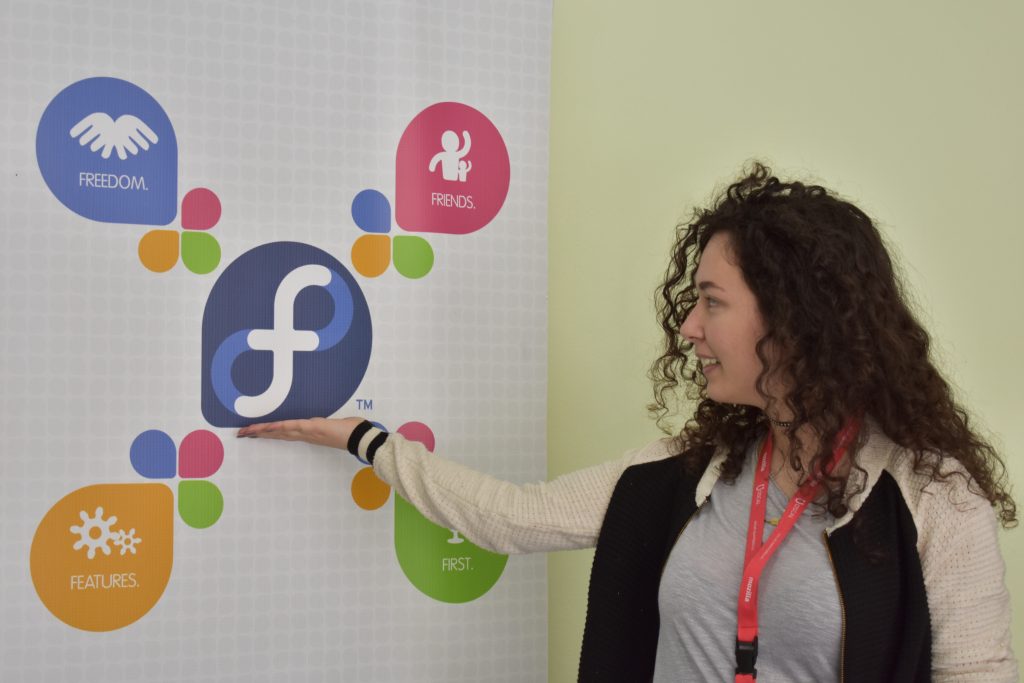 After two days of talks, workshops, and hallway discussions, the final talk finished around 4:00pm on Sunday. Azizaj closed out with some final words of encouragement and thanks for attendee participation. Angelo Lushka, a Fedora translator and user, introduces the different Fedora spins at the installfest

The presence of Fedora, open source software, and its philosophy was present during the entire weekend. Between stickers, install media, and brochures from community tables and the various presentations during the weekend, participants and organizers felt the event was worthwhile. “We had limited time to plan, but it was important to bring Linux to people to introduce the philosophy, show them how to use it, and also how they can give back,” Anxhelo Lushka, an event organizer and Fedora contributor, explained. “We hope attendees had new experiences and learned something new and useful for the real world, for jobs or studying. We also hope we convinced them to contribute and give back, even if in a small way.”

Now that Linux Weekend 2017 is finished, the organizing team is switching their focus to Open Source Conference Albania (OSCAL), the largest open source conference in the region.

Find Fedora near you

Open source events are happening all around the world, and Fedora might be closer to you than you think! Check for local user or meet-up groups near you to get involved in some of these events. Meetup.com is a great way to find local events happening in your community. You can also keep an eye on what Fedora is up to by following us on Facebook, Twitter, Google+, or Instagram.

We hope to see you at an event in the coming future!