Keybase on Fedora: crypto for everyone

Keybase is a service that makes a security web of trust usable for everyone. It uses encryption to provide secure communications — including chat, file sharing, and publishing documents. But it extends encryption into a social context, like Github or Gitlab do for project and source code control. Like other acceptable secure systems, Keybase doesn’t rely on secret source code, and is based on free software.

Most people use some form of social network today. Quite a few of these are already supported, including:

Proving the authenticity of a social account or site involves posting special coded information. These proofs show that an account or site truly belongs to you. Then other users can also verify your identity through these proofs. Arbitrary websites under your control are also supported.

The proofs are stored in a blockchain that ensures integrity and authenticity as you make changes.

To get started, download and install the package for your system. This example assumes you have an Intel 64-bit processor, like most computers today. If you have a very old 32-bit system, use i386 instead of amd64 below. The package takes some time to download, depending on your internet connection speed.

The following screen appears, encouraging you to use encryption. The following window appears if you’re running a graphical desktop: 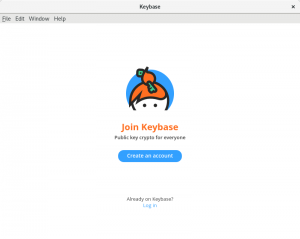 When you create a new account, you’re asked to name the computer from which you’re using the service. That way the service can alert you if there’s a login from a new device.

You’ll also receive a special proof that you should write down and store in a secure location. It will look similar to this: This default proof is recorded like other devices or computers where you log in. It lets you access your Keybase account from another computer in case your known computers are lost, broken, or stolen. The long list of words makes the proof easy to type in, but very hard to guess.

If you’re not running a graphical desktop, or prefer the terminal, type this to see a list of available commands:

If you want to prove more services, for example, run the keybase prove command. For help with a specific command such as prove, type:

If you’re using Fedora Workstation, notice a Keybase icon appears in the extra status icon tray at the bottom left of your screen. Select it to bring up the main app window. From this window, you can carry out different secure tasks.

By default, the window shows your encrypted folders. These are stored on your system using a FUSE plugin, and you can access them through the /keybase path. You can use these folders just like any other folder on your system. When you store documents there, they are automatically encrypted. Items in the public folder are available for others on Keybase to see. The other users can be certain these documents are authentic, thanks to the way GPG encryption and signing work.

When you select the people icon, your profile window appears. From this window you can access your list of followers and those you’re following on Keybase. “Following” is the Keybase expression of verifying identity.

Using the Keybase main window, you can share files with other users either publicly or privately. Users signed into Keybase receive notifications when new files are shared to them or the contents of a shared folder change. You can also enjoy encrypted chat with other users with whom you’re connected. You’ll know when someone shares files or chats with you that they’re really who they claim to be. In part this is because they’ve verified their identity based on social accounts and properties. Because many other Keybase users recognize those accounts you can be more certain of their identity.