Introduction to Kubernetes with Fedora

1. Introduction to Kubernetes with Fedora

2. Clustered computing on Fedora with Minikube

This article is part of a short series that introduces Kubernetes. This beginner-oriented series covers some higher level concepts and gives examples of using Kubernetes on Fedora.

Kubernetes simplifies and automates the process of deploying containerized applications at scale. Just like Ansible orchestrates software, Kubernetes orchestrates deploying infrastructure that supports the software. There are various “layers of the cake” that make Kubernetes a strong solution for building resilient infrastructure. It also assists with making systems that can grow at scale. If your application has increasing demands such as higher traffic, Kubernetes helps grow your environment to support increasing demands. This is one reason why Kubernetes is helpful for building long-term solutions for complex problems (even if it’s not complex… yet). 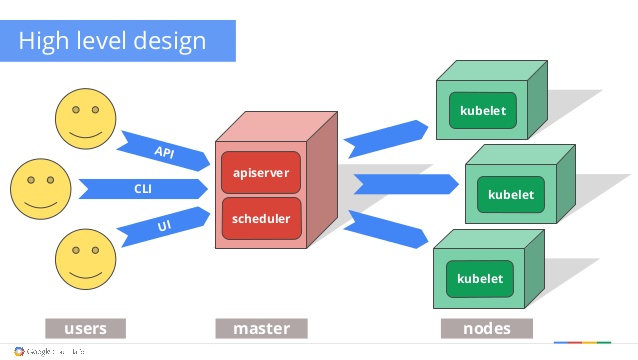 These three layers are orchestrated and automated by Kubernetes. One of the key pieces of the master (not included in the visual) is etcd. etcd is a lightweight and distributed key/value store that holds configuration data. Each node, or kubelet, can access this data in etcd through a HTTP/JSON API interface. The components of communication between master and node such as etcd are explained in the official documentation.

Another important detail not shown in the diagram is that you might have many masters. In a high-availability (HA) set-up, you can keep your infrastructure resilient by having multiple masters in case one happens to go down.

It’s important to understand the concepts of Kubernetes before you start to play around with it. There are many core concepts in Kubernetes, such as services, volumes, secrets, daemon sets, and jobs. However, this article explains four that are helpful for the next exercise of building a mini Kubernetes cluster. The four concepts are pods, labels, replica sets, and deployments.

If you imagine Kubernetes as a Lego® castle, pods are the smallest block you can pick out. By themselves, they are the smallest unit you can deploy. The containers of an application fit into a pod. The pod can be one container, but it can also be as many as needed. Containers in a pod are unique since they share the Linux namespace and aren’t isolated from each other. In a world before containers, this would be similar to running an application on the same host machine.

When the pods share the same namespace, all the containers in a pod:

But what’s the point of having pods? The main purpose of pods is to have groups of “helping” containers on the same namespace (co-located) and integrated together (co-managed) along with the main application container. Some examples might be logging or monitoring tools that check the health of your application, or backup tools that act when certain data changes.

In the big picture, containers in a single pod are always scheduled together too. However, Kubernetes doesn’t automatically reschedule them to a new node if the node dies (more on this later).

Labels are a simple but important concept in Kubernetes. Labels are key/value pairs attached to objects in Kubernetes, like pods. They let you specify unique attributes of objects that actually mean something to humans. You can attach them when you create an object, and modify or add them later. Labels help you organize and select different sets of objects to interact with when performing actions inside of Kubernetes. For example, you can identify:

Labels are as flexible as you need them to be, and this list isn’t comprehensive. Be creative when thinking of how to apply them.

Replica sets are where some of the magic begins to happen with automatic scheduling or rescheduling. Replica sets ensure that a number of pod instances (called replicas) are running at any moment. If your web application needs to constantly have four pods in the front-end and two in the back-end, the replica sets are your insurance that number is always maintained. This also makes Kubernetes great for scaling. If you need to scale up or down, change the number of replicas.

Even though replica sets are where the scheduling magic happens to help make your infrastructure resilient, you won’t actually interact with them much. Replica sets are managed by deployments, so it’s unusual to directly create or manipulate replica sets. And guess what’s next?

Deployments offer functionality such as revision history, so it’s always easy to rollback changes if something doesn’t work out. They also manage any updates you push out to your application, and if something isn’t working, it will stop rolling out your update and revert back to the last working state. Deployments follow the mathematical property of idempotence, which means you define your specs once and use them many times to get the same result.

Deployments also get into imperative and declarative ways to build infrastructure, but this explanation is a quick, fly-by overview. You can read more detailed information in the official documentation.

If you want to start playing with Kubernetes, install it and some useful tools from the Fedora repositories.

This command provides the bare minimum needed to get started. You can also install other cool tools like cockpit-kubernetes (integration with Cockpit) and kubernetes-ansible (provisioning Kubernetes with Ansible playbooks and roles).

If you want to read more about Kubernetes or want to explore the concepts more, there’s plenty of great information online. The documentation provided by Kubernetes is fantastic, but there are also other helpful guides from DigitalOcean and Giant Swarm. The next article in the series will explore building a mini Kubernetes cluster on your own computer to see how it really works.

Questions, Kubernetes stories, or tips for beginners? Add your comments below.